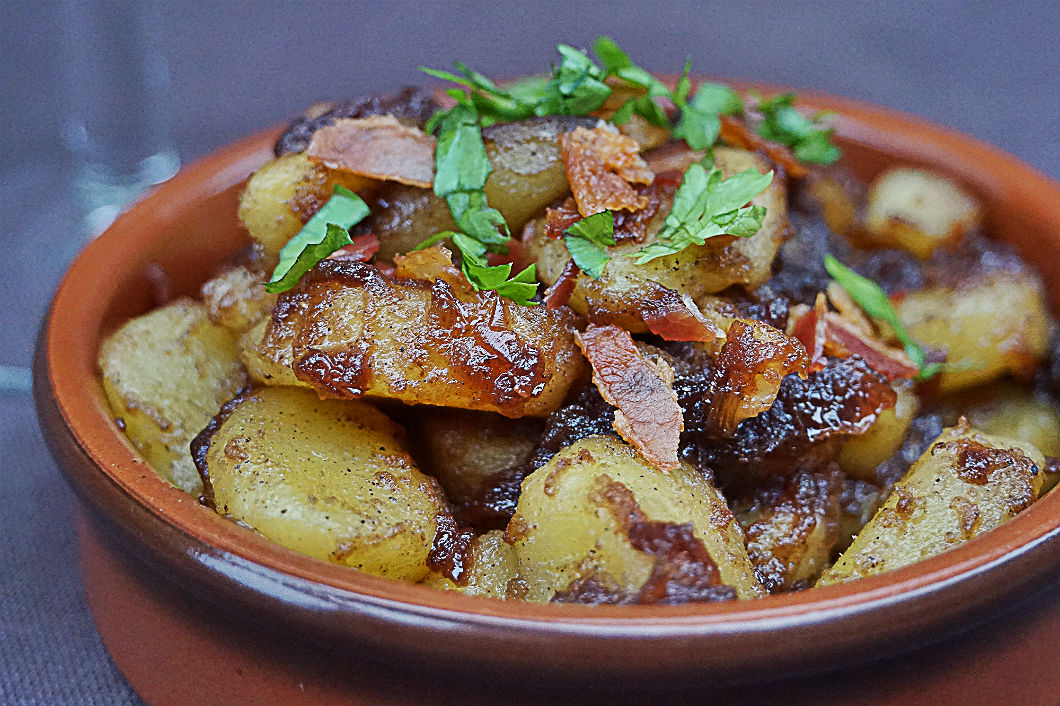 This recipe was given to us by Graham Garrett, Chef/Patron of Michelin starred The West House who has been a great supporter of ours from the beginning. (I should add at this point, that I made the dish in the photo, not Graham. I am fully aware that I won’t get a Michelin star for my presentation skills!)

Sweat onions in the butter, with salt and white pepper until completely tender with no moisture remaining.
Add sugar and sherry vinegar, reduce to a light caramel.
Add wine and reduce to a marmalade consistency.
Boil the potatoes in salted water until just tender, cool and peel skins.
Cut into slices.
Cook bacon in oven between two baking sheets to keep it flat, until crisp.
Sauté the sliced potatoes in foaming butter until crisp and golden.
Stir in 2 tbsp. of the onion marmalade and crumble in the crispy bacon.

Perfect potato for this recipe 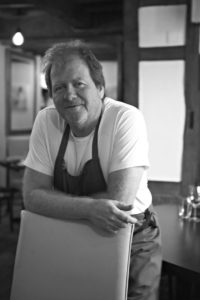 A word from Graham;

I often hear people refer to potatoes as a generic part of a recipe, never giving them the respect they deserve as an important ingredient in its own right. You wouldn’t dream of using any old cut of meat for your Sunday roast or mincing a piece of prime fillet for a spaghetti Bolognese, so why do it with spuds? As with most things, there are different potatoes for different jobs. At The Potato Shop, most of the hard work has been done for you in knowing that all the potatoes are from the same ground, eliminating the frustration of discovering a particular type that you like; only to find the next time you buy them they are completely different. I always favour my potatoes unwashed. Keep them in the dark and never in the fridge, washing and peeling only what you need, as and when you want them. Varieties change seasonally so don’t be afraid to experiment to find what works best for you.

I am currently using Red Duke of York which has such a dry matter it’s great for Gnocchi and mash.

Another great masher is Yukon Gold which seems to absorb more butter and cream than any other potato I know.

My old faithful Estima has never let me down either but does need a bit more help in the flavour department, and don’t be tempted to use them from anywhere else as they’re not the same!

Rattes are great for parboiling then sautéing in olive oil and butter and Nicola are the best waxy potato when you want that amazing texture and flavour and something that won’t full to pieces when you cook it.

For flavour I think it’s hard to beat the Pink fir apple. It looks a bit weird, more like a Jerusalem artichoke. Served warm, tossed in the best olive oil you can afford with a bit of crunchy sea salt and a scattering of fresh herbs is a meal in its own right.

Delivery charges: £7.50 for 1-20kg of any of our products. For over 20kg please contact us directly on 01580 766 866 or email potatoshop@morghew.com. *Christmas Pre-Orders now being taken! Please add your order to basket & mention in the order notes at checkout that you would like to delay delivery until Christmas* Dismiss